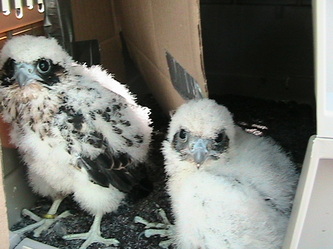 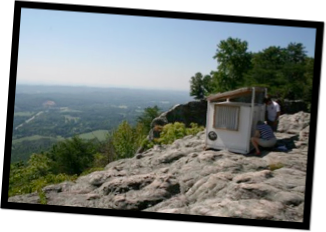 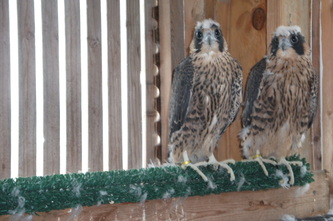 In Georgia, Rock City, in cooperation with Wings to Soar, has released seven captive hatched Peregrines into the wild. This is an attempt to re-establish this bird’s population in the Chattanooga and the Northern Georgia areas.  In 2011, a Peregrine Falcon was released in the city of Chattanooga and was sighted for several weeks after his release. This created quite a stir from those that witnessed this incredible bird’s aerial movements.  Even more exciting, a Peregrine Falcon was released at Rock City in 2011 equipped with a Satellite Telemetry device capable of pinpointing
the movements of the young Falcon throughout the world. This was the first time in history a falcon was released   from the southern part of the United States with this type of tracking unit.  The information gathered from this device will yield a whole new set of data never gathered before, giving us a unique perspective on the movements of a falcon from the southern U.S.

In 2012 a Young Falcon who did not make a successful flight from his nesting site in Atlanta, was brought by Georgia DNR to Rock City to give him a couple weeks to build up his strength. This was a successful move for Fourscore, he flew within into Lookout Valley within minutes of the door being raised on his  release box.
He stayed in the Lookout Mountain area near Rock City for about two weeks.
In this time we witnessed some amazing Ariel flights, as Fourscore was learning his tremendous ability to dive
and maneuver through the air.  We also saw him chasing and diving at a couple of local Turkey Vultures,
who made the mistake of coming to close to his food placed on his release box. The Vultures cumbersome flight
was no match for the whirling  nimbleness of Fourscore. I feel as if we were watching a WWII dogfight, and
Fourscore was the more advanced and faster aircraft.  After a few weeks Fourscore no longer returned to his
release box for food.. He most likely began his long journey to South America, it was quite a gift and a privilege
to witness the first flights and ariel lessons of such an incredible raptor.


Fourscore on his release box, overlooking lookout Mountain valley, Fourscore in a tree near the release site. 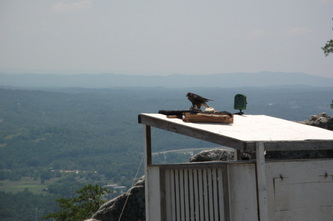 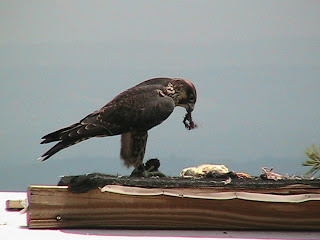 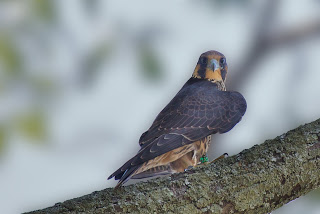 The Peregrine Falcon Restoration project has been active since 2005, and we have released seven Peregrine Falcons from Rock City. Traditionally, after the males are released they return to the release site in about 3 to 5 years. Of course there are many hazards in the wild for young Peregrine Falcons, Therefore; it may take several more years of releasing Peregrine Falcons before we see a increase in population in the Northern Georgia/  Chattanooga Tennessee area. 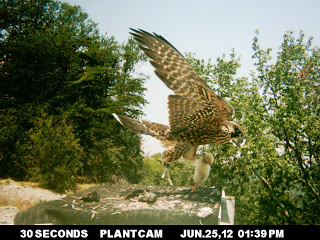